A White Lady is a female ghost who appears dressed in white. She will usually be bound to a specific place, such as an old home, and connected with a local legend about a tragedy. This tragedy will often involve the loss of child and/or the betrayal of a husband.

In Medieval England, the appearance of a White Lady in a home was said to herald the death of someone in that household. 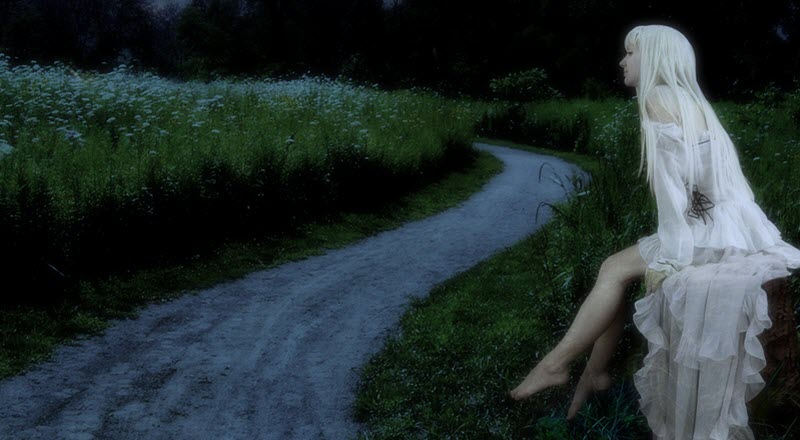 The White Lady of Beeford, East Riding of Yorkshire, England

This White Lady is reported from a stretch of road between Beeford and Brandesburton. She is seen running across the Beeford Straight toward the junction of North Frodingham. Locally, she is often referred to as “The Running Lady”.

The White Lady of the Berliner Schloss, Germany

The first report of a White Lady being seen in Berliner Schloss is from 1625, and the reports then continue up until 1790. The White Lady of this castle has been linked to several historical figures. There are many prominent ladies to chose among, since the castle – which his located in central Berlin – used to be the royal and imperial palace and winter residence of the Electors of Brandenburg, the Kings of Prussia and the German Emperors. In the 1950s, the palace was destroyed by the East German communist regime, but the palace is currently being rebuilt (completion expected in 2018).

The White Lady of Haapsalu piiskopilinnus in Estonia

Haapsalu piiskopilinnus is a castle with a cathedral located in the coastal town Haapsalu in Estonia. The oldest parts of the castle and the church building were built in the 13th century.

According to legend, the White Lady only shows herself in August and only when the moon is full and the sky is clear. When she appears, it is always on the inner wall of the chapel and she is looking out of the Baptistery’s window.

She is said to be the ghost of a woman who had a forbidden relationship with a priest. To be near him, she disguised herself as a choir boy. For a long time, the affair remain a secret, but she was discovered when the Bishop of Ösel-Wiek visited. As a punishment, she was immured in the wall of the chapel.

The White Lady of Rožmberk (Rosenberg Castle) in the Czech Republic

The White Lady appearing in the Rožmberk Castle (Rosenberg Castle) in South Bohemia is said to be the ghost of Perchta of Rožmberk (circa 1429-1476). She was the daughter of Oldřich II of Rožmberk, a prominent Czech nobleman, and in 1449, she married another nobleman, Jan of Lichtenštejn. The marriage was unhappy and she wrote many letters to both her father and her brothers detailing how poorly she was treated. As her husband Jan was dying, he asked her for forgiveness for his treatment of her throughout their marriage. She refused to forgive him and he reacted by cursing her. This is why she gets no rest in her grave and is forced to haunt the castle.

This is one of the most famous White Ladies in the United States. Locally, she is known as The Lady in the Lake since she is associated with the lake in Durand-Eastman Park in Rochester.

According to legend, she is the ghost of a woman whose daughter was murdered in the park in the 19th century and the White Lady is now obsessively looking for her daughter there. Several versions of the story exists. In some, the daughter was slain by a group of hoodlums, in others, she was killed by her own boyfriend. In some stories, the mother commits suicide in grief. In others, she dies a natural death – but alone and heartbroken.

The White Lady of Whopsy is said to haunt Wopsononock Mountain and Buckhorn Mountain and is associated with the city of Altoona.

According to legend, the White Lady is the ghost of a woman who died in a car accident together with her husband as their car tumbled off the road and down the mountain side. They were on their way to Altoona city, but never reached their destination. The White Lady can now be seen looking for her husband on foggy nights, around the sharp turn of the road known as The Devil’s Elbow.

This White Lady is said to be the ghost of Mary Frances Burwell, of the wealthy Burwell family. According to legend, she would spend her days on the front porch of her house, waiting in vain for her husband to return from the Civil War. After death, she continued this practice.

This White Lady is said to haunt Palmetto Flats by Highway 22 in Madisonville. Locally, she is known as The Silk Lady because she appears to be dressed in a wispy, silky white dress.

According to local lore, she is the ghost of a woman who lived here in the mid 19th century. One night, she was riding back to town after seeing her lover off. As she rode through an old logging trail, her horse was spooked by a snake and threw her off. She hurt her head badly in the fall and died as a result of this injury.