In many of the pre-columbian Mesoamerican cultures, mirrors were seen as portals to a realm that could be observed but not entered. Mirrors were created and used for a variety of purposes, including divination. At the time of the Spanish conquest of mesoamerica, the Maya, Aztecs and Purépecha were all practicing a type of divination where the reflective surface of water in a bowl was used as a mirror. 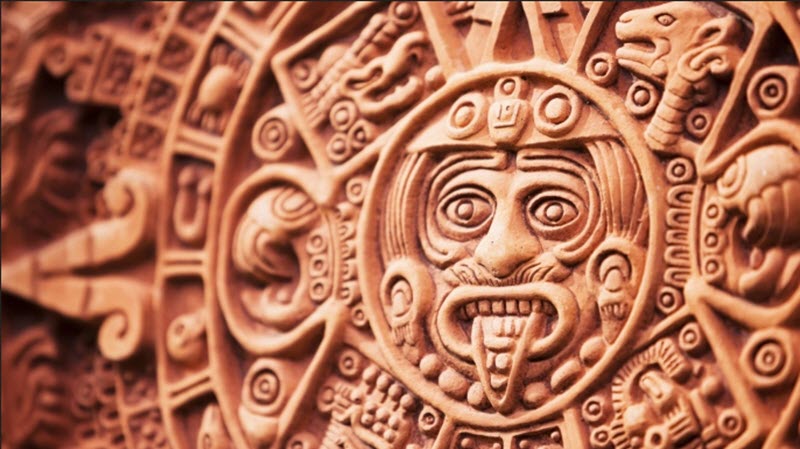 The Wixáritari (Huichol) people of the Sierra Madre Occiental range still retains a considerable body of lore regarding mirrors. According to their traditional belief system, a mirror is a supernatural portal, and some Wixáritari use circular glass mirrors in divination ceremonies. In the Wixáritari language, such a mirror is known as a nealika, a word that also means face.Symbolically, the mirror is seen as linked to the sun and moon in the sky, as well as to flowers, faces and eyes down here on earth. There are strong similarities between this belief system and that of the Teotihuacan during the Classic period.

In modern Wixáritari lore, there is a story about how the first nealika was created by a spider who spun her web across a gourd bowl.

In pre-columbian Mesoamerican art, we can see how pools of liquid are used as mirrors. This liquid was probably water most of the time, but some scholars have argued that mercury might have been used as well.

To create a mirror that didn’t rely on any liquid to produce the reflection, a single piece of iron ore was polished until it was shiny enough. This is one of the very earliest forms of mirrors known from Mesoamerica.

As the Classic period gives way for the post-Classic period, obsidian mirrors become more common. Obsidian is a naturally formed volcanic glass. In Mesoamerica, it is found in the volcanic regions of the Sierra Madre mountains.

Since the Preclassic period, there has been a strong association between mirrors and the sun in Mesoamerica. This association is known from the Olmecs, and it continued with the Mayas and into our time. The Sierra Totanac people still referred to the sun as espejo sol (mirror sun) rather than just sol.

In the postclassic period, the Toltecs and Aztecs both had turquoise mirrors that represented the sun.

From the Classic period and onward, mirrors have been associated with spider webs in Mesoamerica. The network of lines present at the surface of a mosaic mirror might be the reason behind this.