Benandanti (“Good Walkers”) were members of an agrarian visionary tradition in 16th and 17th century. The Benendanti lived in northeastern Italy, in district called Friuli.

According to stories told by the benandanti themselves, they struggled against evil witches (maladanti) to protect the next season’s crops. This struggle would take place when the sleeping benandanti traveled out of their bodies by supernatural means. 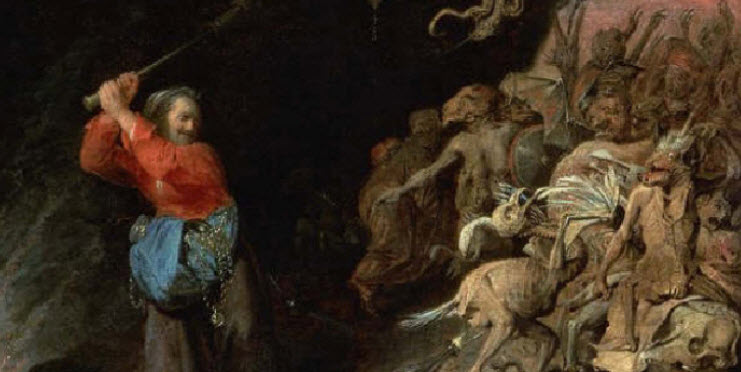 According to reports written down in the Early Modern period, benandanti took part in nocturnal visionary events during specific Thursdays throughout the year.

During these visionary events, their spirit would leave their sleeping body and ride upon various animals into the sky. The spirit would visit places in the countryside and participate in games and other activities with other benandanti. The benandanti would also use sticks to battle evil maladanti who threatened to destroy the region’s crops.

Even outside the nocturnal journeys, the benandanti were believed to have certain supernatural powers, including the ability to heal sickness.

According to some sources, children born with a caul on their head were especially likely to become benandanti. A child is said to be born with the caul if a portion of the birth membrane remains on its head as it is delivered. Birth with a caul is rare, occurring in fewer than 1 in 80,000 births.

Between 1575 and 1675, a number of benandanti were accused of being witches or heretics.

In 1575, the village priest Don Bartolomeo Sgabarizza began investigating reports made by a self-proclaimed benandanti named Paolo Gasparotto. The priest quickly abandoned his investigation, but the case was reopened five years later by the inquisitor Fra Felice de Montefalco. Montefalco interrogated Gasparotto and a number of other local benandanti – of which some were ultimately condemned for heresy.

The inquisition is believed to have caused the benandanti tradition to go extinct. After the inquisition, the term benandanti became a synonym for witch (“stregha”) in the Friulian region.

The first historian to study the benandanti tradition was Carlo Ginzburg from Italy. In the early 1960s, Ginzburg researched surviving trial records concerning benandanti, documents that he happened to stumble upon in the Archepiscopal Archives of Udine.

In 1966 he published a book about his findings in Italian, but it wasn’t until 1983 that it became available in an English translation: The Night Battles: Witchcraft and Agrarian Cults in the Sixteenth and Seventeenth Centuries.

According to Ginzburg, the benandanti were a fertility cult who defended the crops and ultimately the fertility of the agrarian fields. He also believed that it was a surviving remnant of a pre-Christian European tradition of visionary experiences associated with fertility cults.

Ginzburg’s idea of the benandanti being a part of an unbroken chain of pre-Christian paganism has since been challenged.